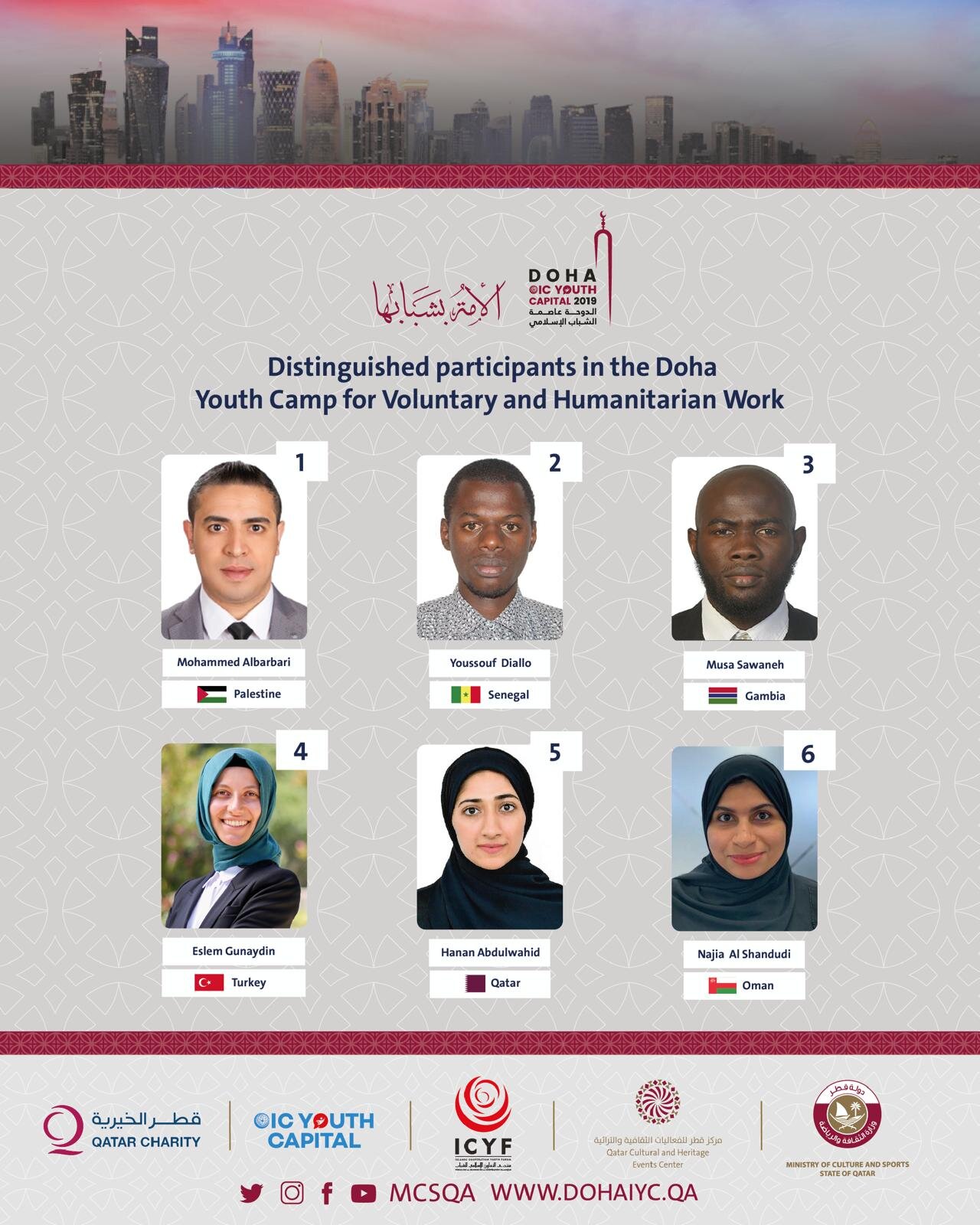 DOHA: The Ministry of Culture and Sports has selected the distinguished participants in the ‘Doha Youth Camp for Voluntary and Humanitarian Work’ activity.

The event was held on October 27 and continued till November 6 with a wide participation of youth from 53 countries, under the supervision of the Ministry of Culture and Sports.

The Camp organised in collaboration with Islamic Cooperation Youth Forum as part of the ‘Doha – OIC Youth Capital 2019’ activities under the motto ‘The Youth is the Power of Nation.’

The six youth who were chosen among them three men and three women.

The distinguished participants will be honored in a big ceremony organized by the Ministry of Culture and Sports next January as part of the ‘Doha – OIC Youth Capital 2019’ activities, aimed at developing the capacities of Muslim youth in the field of relief and disaster management.

The youth who were selected expressed their happiness to participate in the Camp and confirmed their great benefit from it.

“Our participation in the camp came out of our belief in our active role in moving our communities and adopting our local issues, especially with the growing global challenges linked in the humanitarian scene around the Islamic world, which increase in the number of humanitarian needs such as climate change, wars and crises,” said Hanan Abdul Wahid Abdul Rahman.

For her part, Al Shandudi said that ‘Doha Youth Camp for Voluntary and Humanitarian Work’ activity was launched from a basic idea, which is the value of man in societies, and the importance of the role of youth in the fields of giving, and altruism.

We should highlight the importance of the role that young people play towards their society, which promotes the motto ‘The Youth is the Power of Nation.’, she added.

Al Shandudi pointed out that during the 10-day training period in the camp, several seminars, training courses and workshops were held on international law, codes of conduct for humanitarian response and other effective activities.

The Camp provided us with the opportunity as young participants to acquire a set of experiences in the field of volunteerism and humanitarian work. We express our sincere thanks to the Ministry of Culture and Sports and to all partners who have contributed to the success of this event.

Eslem Gunaydin commented that “I spent 11 days in Qatar through my participation in the “‘Doha Youth Camp for Voluntary and Humanitarian Work ” activity under the slogan ‘The Youth is the Power of Nation.’. I learned a lot about relief, disaster management, volunteering and humanitarian work from lectures and practical events, What I learned influenced me a lot, especially the part of the simulation of living refugee life in the camp.

Sawaneh from Gambia said that: “It is an honor to be among these distinguished youth and to present my point of view to the world by participating in the Doha camp. Thanks to those who believed in us and chose us among more than 7000 young men and women who came to participate in the camp.

I learned that change starts from the same person affecting those around him, I have seen young people who truly believe in their ability to change for the better, he added.

“I am very happy that we have an Islamic country like Qatar where there are those who care about the youth of the nation and work to hone their talents through projects and camps that contain practical and scientific aspects resulting in qualified young people, Diallo said.

Muhammad Al Barbari said that: “I never expected that I would visit 57 Islamic countries from around the world in just 11 days. My trip to these countries was not by plane, but through ‘Doha Youth Camp for Voluntary and Humanitarian Work, which aims to combine Islamic values ​​with the spirit of teamwork.

Al Barbari explained that everyone who participated in the Camp served as an ambassador to his country and worked together to provide the best we have to help the suffering people in the Islamic world, especially the areas suffering from conflicts. We have benefited from the visit of multiple institutions, which added to us a lot, and therefore we have to extend deep thanks to all those who contributed to the success of this Camp.