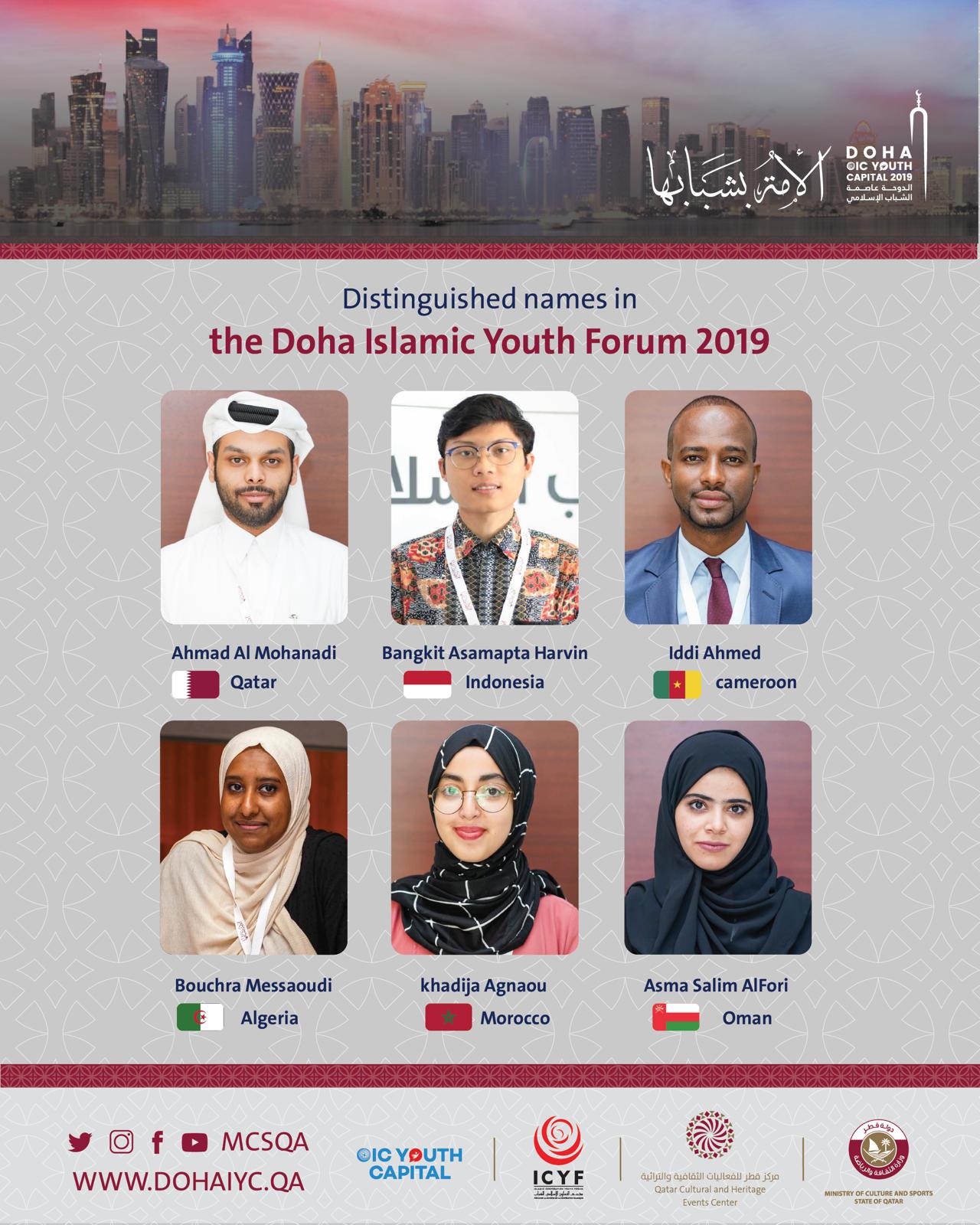 Three boys and three girls representing different countries will be honored with the Medal of Youth Excellence during the closing ceremony of Doha – The Capital of Islamic Youth 2019.

The forum was part of the events of Doha – The capital of Islamic Youth 2019.

DOHA: The Ministry of Culture and Sports has announced the names of the outstanding participants in the Doha Muslim Youth Forum, which was held by the Ministry among the activities of ‘Doha – The Capital of Islamic Youth 2019’ from July 7 to 11, 2019.

The distinguished names include three boys and three girls. The boys’ names include Ahmed Al Mahanadi from Qatar, Banjkeed Asambada from Indonesia and Aedi Ahmed from Cameroon.

The girls’ names include Bouchra Massoudi from Algeria, Khadija Ajnoui from Morocco and Asma Salem Al Fawri from Oman.

The organizing committee chose the names of outstanding participants based on objective criteria, foremost of which is time commitment, collaboration with colleagues, active participation, and innovation.

“This selection reflects that the events have achieved one of the important criteria, which is to achieve excellence that is based on behaviors, values, customs and principles,” he said.

Dr Al Hurr said that the significance of naming these outstanding young people means that the “Youth is the Power of the Nation”, and that the events of ‘Doha, The Capital of the Islamic Youth 2019’ has been able to bring this motto to the ground and that it is not just a slogan but a realistic slogan.

In his presentation, innovator Mohammed Al Jufairi, during the workshop which deals with ‘impact of social media sites on youth cultural practices’, said that the attendees interacted with the workshop which means that they are representing elites of their societies.

Al Jufairi pointed out that through the workshop that he presented, he received a great response from the participants on the themes presented in the workshop and the participants took full interest in many issues related to the great impact of the social networking sites on different groups in the Arab and Islamic societies.

And about what he noticed from the evaluation of youth social media sites during this workshop, Al-Jufairi said that the workshop highlighted the positives and negatives of social media through discussion with the participants.

“The youth expressed their concerns, ideas and opinions on some of the cultural behaviors carried by these sites, including the lack of Arabic content on social media sites, in addition to differences in dialects among some users.”

“All this reflects the depth of the discussions that took place in the workshop, which highlighted the level of awareness among young people,” he noted.

Walaa Yousif, a member of the jury at the Doha Muslim Youth Forum, spoke about the criteria for choosing distinguished students. These were six criteria, such as how to deal with colleagues within the forum, commitment to time, innovation and creativity.

She expressed her pleasure to participate in the Doha Muslim Youth Forum and to be a member of the Evaluation Committee, which was composed of six members.

She evaluated between 70 and 80 participants from the youth who participated in the forum representing the countries of the Islamic world.

“My participation as a jury member added a lot of experience, such as accuracy of observation and depth of focus,” she said.

The announcement of the distinguished names of the Doha Muslim Youth Forum has motivated youth from the Islamic world. The Organizing Committee will honor the outstanding youth at the closing ceremony.

The Doha Forum was held under the motto “The Youth is the Power of Nation” and held in cooperation between the Ministry of Culture and Sports and the Islamic Youth Cooperation Forum of the Organization of Islamic Cooperation.