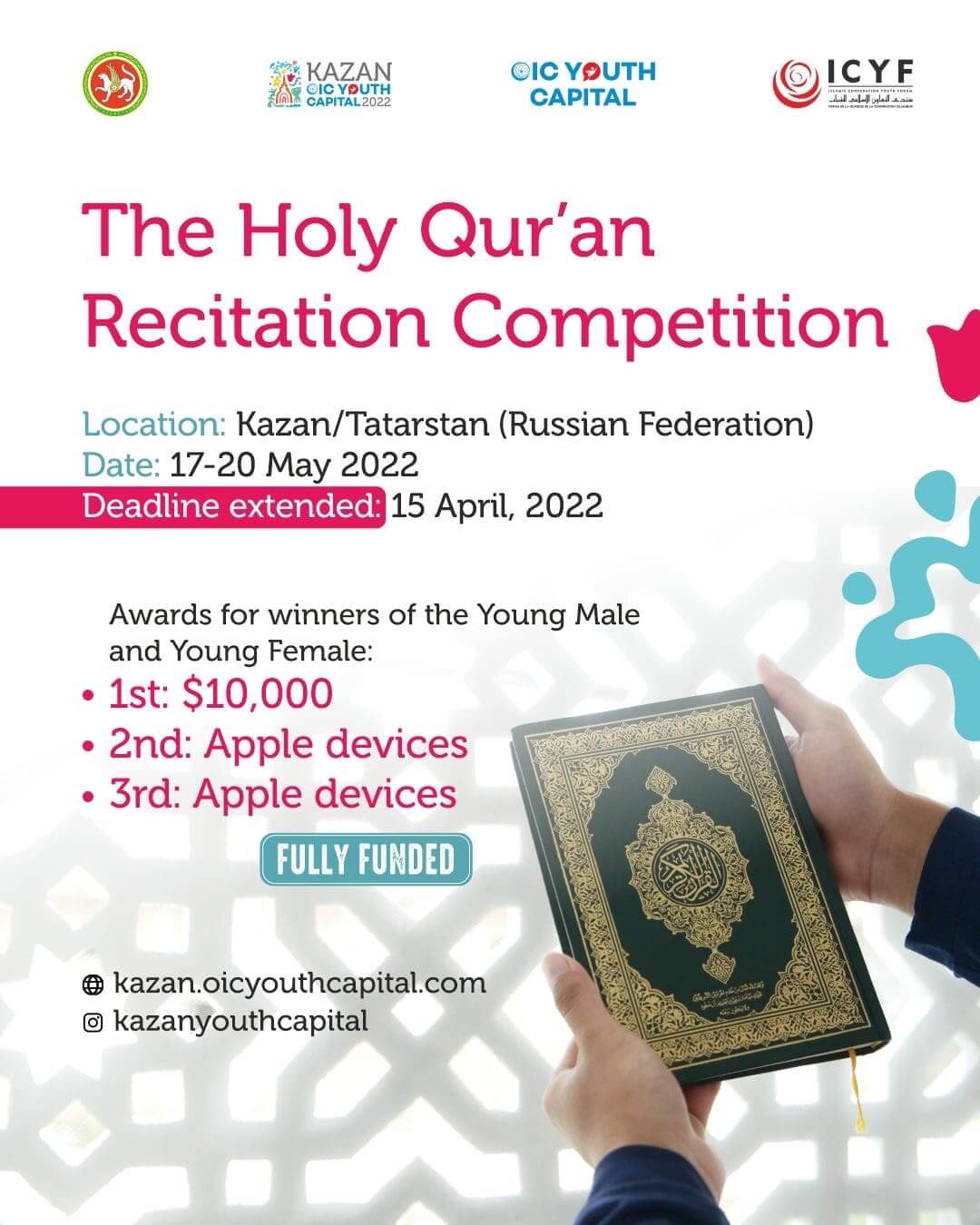 AIM
The Holy Quran Competition aims to promote literacy in the Quran and encourage its recitation, memorization, and apply its spirit in life. The Competition is committed to connecting the young generation to those who recite the Holy Quran.

OBJECTIVES:
This program intends to achieve the following objectives:
• Spreading the message of the Holy Qur’an through the participation of the youth
• Enabling the bonds of brotherhood, scientific integration, spiritual communication, and working in favor of the great book of Almighty of Allah
• Introducing Muslims to the tradition of reading the Holy Qur’an
• Identifying and encouraging the best reciters among hafizul-Qur’an of the Holy Quran
• Internationally highlighting the efforts of Russia in serving the Holy Quran.

SELECTION CRITERIA
The submissions will be accepted for the selection process based on the criteria described below.
• To be a citizen (young male and female) of the OIC Member States or the Russian Federation or representative of the Muslim community in the non-OIC Member States.
• Age between 18-30
• Ability to communicate in English/ Arabic/ Russian/Tatar
• Experienced in Tajweed and acquainted with the rules and essence of the Holy Quran recitation.
• Holding a certificate/ diploma confirming the degree of hafizul-Qur’an of the Holy Qur’an
• To be nominated officially by the relevant religious authorities (Ministry/Presidency of Religious Affairs etc.) for the nominees` country of residence or the recognized Islamic Centers or entities in the non-OIC Member States.

THE FORMAT AND METHODOLOGY
The Competition will gather young male and female hafizul-Qur’an between 17-20 May 2022 in Kazan, Tatarstan (Russian Federation).

Once participants get their nomination, they will be invited to Kazan, Tatarstan (RF) to participate in a 3-day Competition.

International Jury members will inform the participants regarding the rules and regulations during the Competition.

Finally, the jury board will select the top 3 male and 3 female participants among all participants.

ANNOUNCEMENT OF SELECTION:
*** Only Nominated participants will receive an email confirmation with logistics and program details. Please check your emails regularly, including spam folders!

COSTS
The host country will cover travel, accommodation, and other costs.

END_OF_DOCUMENT_TOKEN_TO_BE_REPLACED 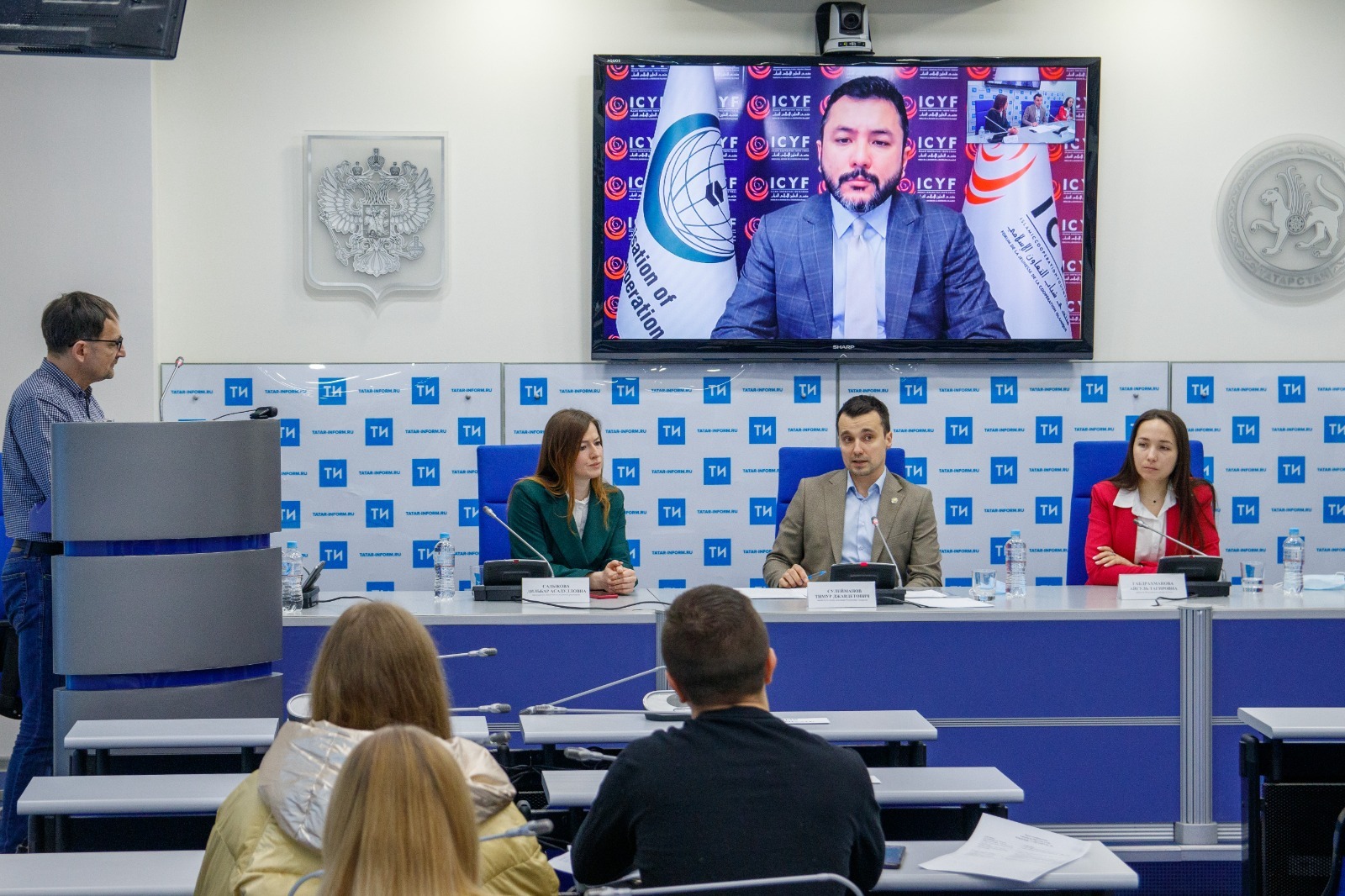 “The International Youth Esports Championship, the Festival of Modern Muslim Culture, the Scientific Congress, the Forum of Young Entrepreneurs of the countries of Organization of Islamic Cooperation — these and other mega-events will be held this year in Kazan, which has become the OIC Youth Capital,” said Mr. Timur Suleymanov, Minister of Youth Affairs of the Republic of Tatarstan at a press conference at the “Tatar-inform” news agency on February 8.

More than 12 large-scale offline and online events will cover all spheres of life and development of the youth of the Islamic world: science, culture, sports, entrepreneurship, social engineering, education and creative industries. According to the organizers, about five thousand people will actively participate in this program.

“We consider the Global Summit of Ministers for Youth Affairs to be held in Kazan in May with the participation of about 200 delegates from 56 OIC member countries and observer countries as a key event,” said Mr. Timur Suleymanov.

– As life shows, specialists working with youth in different countries face the same challenges. Therefore, it is vital to have “platforms” for joint communication, exchange of experience and innovative practices, which will be delivered within “Kazan OIC Youth Capital 2022”.

“Kazan was chosen due to its diverse and rich cultural and civilizational heritage, its talented youth, its pioneering institutions working in the fields of entrepreneurship, innovation and sports, its modern, cutting-edge infrastructure and great potential to provide the best experience for young people from OIC Member States and beyond. I am sure that Kazan will become the “bridge” that will connect peoples and states in solving urgent youth problems. It is especially important that we will work together in the year of the 1100th anniversary of the adoption of Islam by the Volga Bulgaria and will be able to visit the sacred places for Muslims located in Tatarstan,” said Mr. Taha Ayhan, President of the ICYF.

The main program events under “Kazan OIC Youth Capital 2022” will begin in March with a competition of reciters of the Holy Quran, aimed at developing literacy in the study of the Quran and the ability to artistically read it in public. Host responsible for this competition is the republican movement “Selet” – a member organization of the OIC Youth Forum. According to the director of the Selet Youth Center Ms. Aigul Gabdrakhmanova, young people agedfrom18 to 35 from all over the world, both amateurs and professional readers of the Quran, will fly to Kazan to take part in the competition.

Also, in March with the participation of representatives of the Russian Ministry of Foreign Affairs, the Federal Agency for Youth Affairs, the diplomatic corps of the OIC countries and the leaders of the Republic of Tatarstan, Moscow will host the official inauguration ceremony of Kazan as the OIC Youth Capital for 2022.

Kazan will receive a symbolic “key” of the OIC Youth Capital from the previous Youth capital, the city of Dhaka, Bangladesh. The international program “OIC Youth Capital” has been in place since 2016. Since then, the cities of Istanbul (Turkey), Shiraz (Iran), Putrajaya (Malaysia), Fez (Morocco), the Al-Quds region (Palestine), the cities of Doha (Qatar) and Dhaka (Bangladesh) have won the right to have such a status on a competitive basis. Now, for the first time, this series of events will take place in Russia, namely in the Republic of Tatarstan, city of  Kazan.

Today, on February 8, social network accounts under Kazanyouthcapital and special website http://kazan.oicyouthcapital.com/ were launched. These resources are dedicated to the program “Kazan OIC Youth Capital 2022”. This was announced at a press conference by the chairman of the Academy of Youth Diplomacy Ms. Dilbar Sadykova.

She also announced the start of a large live marathon in February, which will cover schools, colleges anduniversities:

“ – Presentations of the program of events “Kazan – the Youth Capital of OIC-2022” will be held in educational institutions, so that as many as possible young people and potential partners will learn about them and, if desired will become the participants, volunteers, or part of a large team.

They will be able to express their ideas and wishes, which we will definitely try to reflect in the agenda of upcoming events. The youth of Tatarstan have a great interest in the countries of the Organization of Islamic Cooperation, we felt this well during the past joint projects. In the countries of the Islamic world, the youth population is high, somewhere it reaches up to50% of the population. Such a large community, which includes the youth of Tatarstan, has common fundamental values ​​- the general humanitarian values ​​of Islam. On these principles, which are sometimes called “halal lifestyle”, we will build our work during this year, uniting on a platform of common values, mutually strengthening, but at the same time maintaining the secular nature of the events,” concluded Ms. Dilbar Sadykova.

END_OF_DOCUMENT_TOKEN_TO_BE_REPLACED 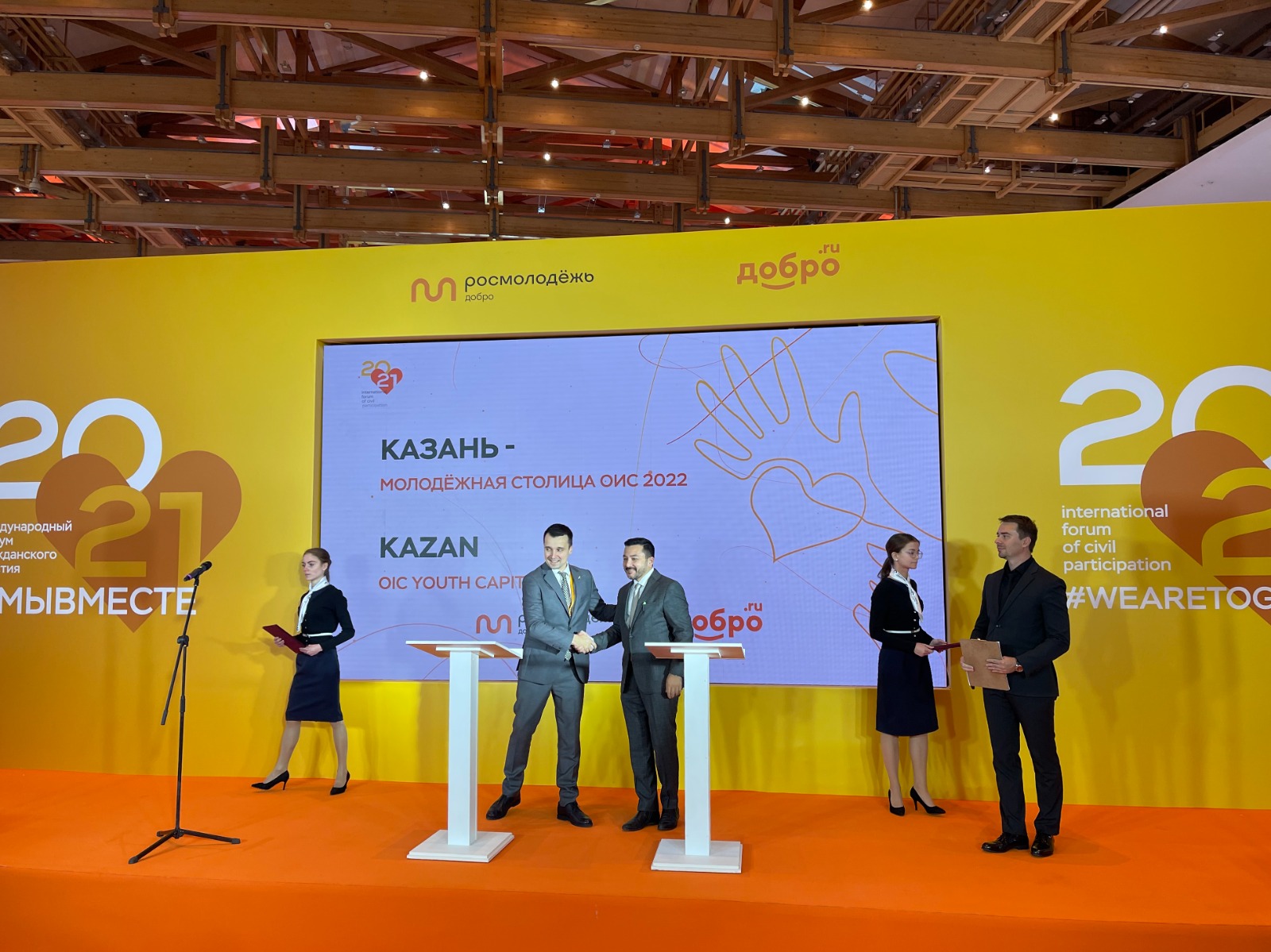 H.E. Taha Ayhan, the ICYF President and H.E. Timur Suleymanov, the Minister of Youth Affairs of the Republic of Tatarstan (Russian Federation) signed protocol of agreement on holding “Kazan OIC Youth Capital-2022” International Program on the margins of the International Forum of Civil Participation organized by the Federal Agancy for Youth Affairs of Russian Federation between 2-5 December 2021 in Moscow, Russia.

END_OF_DOCUMENT_TOKEN_TO_BE_REPLACED 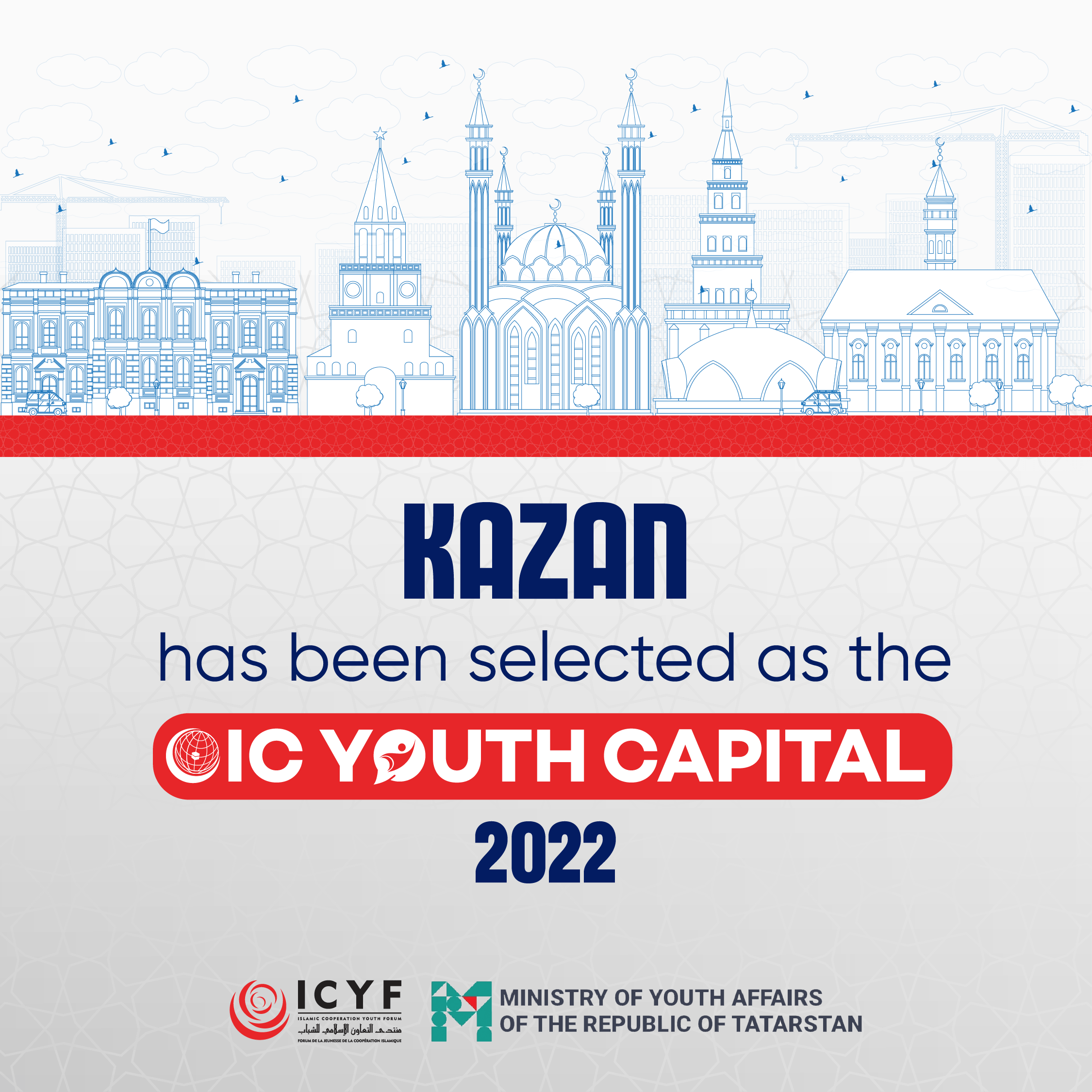 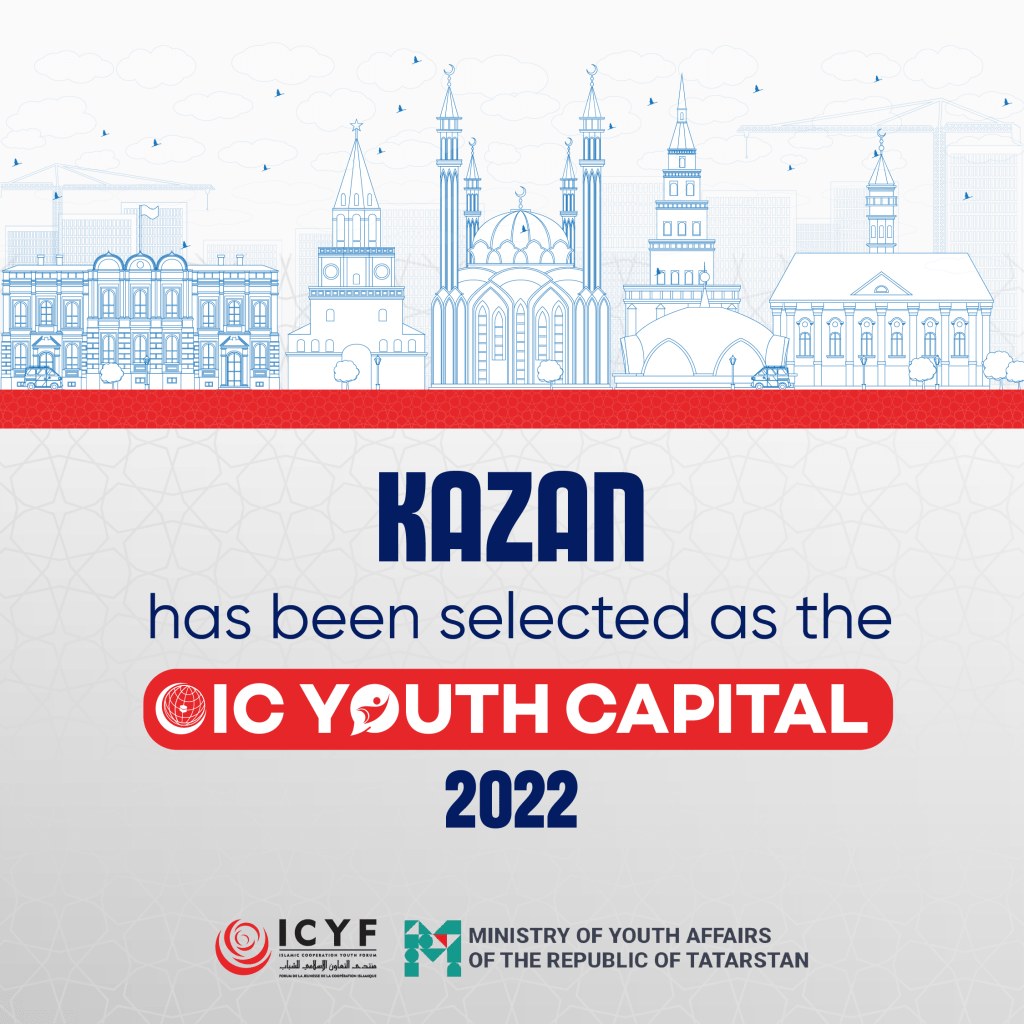 We are excited to announce Kazan, Tatarstan (RF) as the OIC Youth Capital for 2022, taking the reins from Dhaka as the new epicenter for youth development, international projects, and intercultural diversity in the OIC region.

Kazan, the new OIC Youth Capital 2022 will use this unique opportunity to foster cooperation among OIC member states in youth policy and enhance Muslim youth solidarity while also fostering inter-cultural diversity and the spirit of “unity” among the youth of the OIC geography and beyond through various activities.

The year-long OIC Youth Capital International Program encapsulates a chain of activities and events from culture to academic life, youth leadership, entertainment, sports, and youth capacity building to empower and engage the Muslim youth by providing them with an international stage for them to shine and prosper.